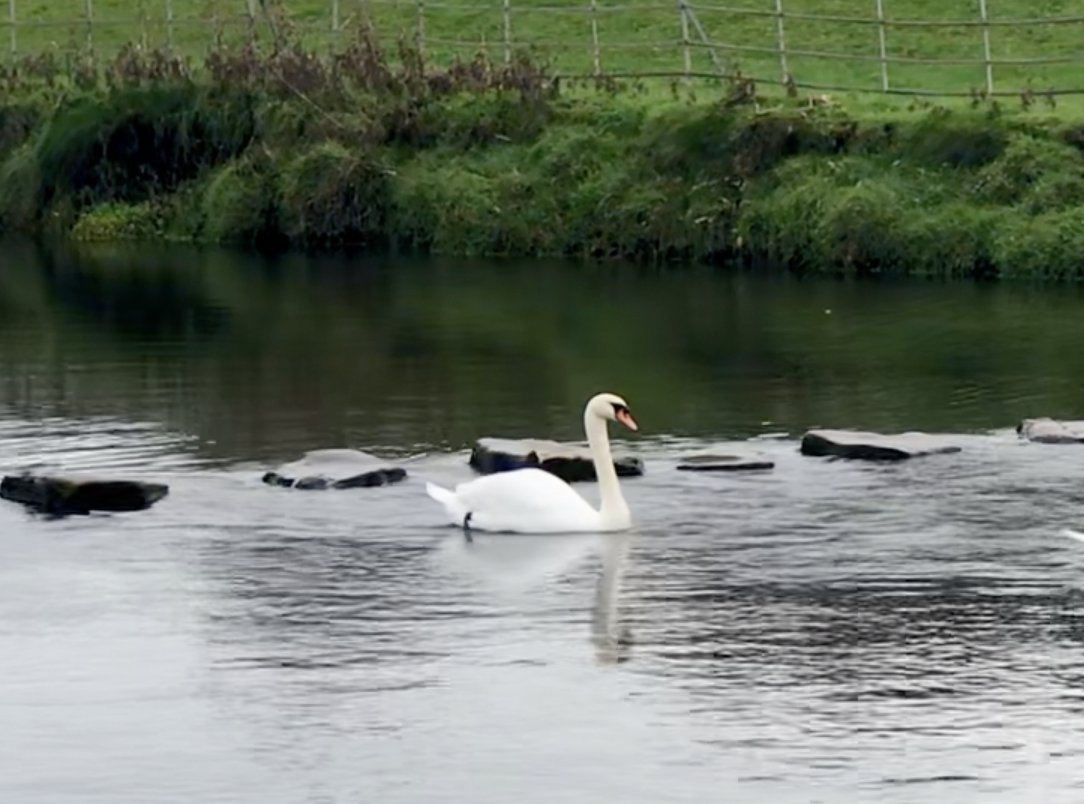 Todays blog is about a more specific trend in Glamorgan folklore from later history. Stories about swans able to transform themselves at will into beautiful girls. I suppose given the delicate, porcelain like features, pure driven snow white complexion, long necks, demure bowed heads and overall glamour of your common or garden swan its probably not that surprising. But it isn’t something you commonly observe so frequently in the folklore of other areas.

These stories not only capitalise on the Welsh tradition for people taking the form of animals and vice versa to achieve a goal, they are also in that hopeless romantic genre so popular especially in the 19th century. A genre where people lose the love of their lives and die shortly afterwards of a broken heart. Or at the very least go mad.

Here are a couple which though unrelated, have a definite thread.

The first is set in the village of Candleston which used to lie between Merthyr Mawr and Tythegston, but these days has been lost to the sand dunes. It was a thriving community in the fourteenth and fifteenth centuries which makes it a little easier to date when this story originates from. Probably not co-incidental that this was also a time when it was very fashionable for the castles and great houses of the landed gentry to have a resident Welsh bard come along and stay for a few months, to write stories and songs. These would have been primarily for entertainment, and there were bragging rights to be had from who had the best bard. The stuff they would write would ostensibly be based on stories from history and would usually feature a celebrated descendant of the paying lord doing something tremendously brave or chivalrous. However, sometimes, their output like in this example, would have been purely for their entertainment value.

In this tale, a Candleston inn keeper’s wife had a reputation for keeping a string of lovers behind her husband’s back. What my mother would have described as being “a bit of a girl”. A wizard, seeking to punish her for her propensities, transformed her into a swan. Despite her indiscretions, the inn keeper loved his wife dearly and begged the wizard to turn her back. He refused, saying that she would turn back into human form in a year, by which time she would have learned the value of monogamy.

The inn keeper tied a blue ribbon to one of her wings, so that when she was swimming with the other swans in the estuary of the Ogmore river, he would know his beloved wife from the others. But one day, when she made advances on a male swan, his partner fought her off, and in the struggle that ensued, the ribbon was lost.

When all the swans flew south away, he watched them departing, unable to stop them, or even to spot his wife amongst them to bid her farewell. He never found out where she had flown to, or whether she turned back to her previous human form. They were never united again.

But if the innkeeper had come to hear a certain other local tale, then his story might have had a different ending. This might be total coincidence, but I think I might know where his wife got to.

There is quite a well-known local story about a farmer on Gower, although in some tellings it is set on Barry Island. This was back in the sixteenth century, when the island was still physically detached from the mainland, before it had houses or fun fairs, and the whole island was farmland.

While working in a field above Whitmore Bay, he saw a beautiful swan alighting among the rocks. There she laid aside her feathers and wings, turned herself into a beautiful maiden and bathed in the waters. After a time she put back on her trappings of a swan and flew away.

The amazed farmer watched this repeated on several occasions. Then one day he lay in wait for the swan, and as soon as she was transformed and enjoying the water, he snuck to the water’s edge, seized her swan garments and hid them. When eventually she rose from her bathe, she spied the farmer. Unable to recast herself as a swan, she asked him if he knew where her garments were. He claimed ignorance.

He offered instead to fetch her some clothes from his mother’s house, to save her dignity. This he did, and they walked along the beach together while he consoled her for the loss of her wings. As time passed, they got to know each other, fell in love and got married. For three years all was well. Then one day, by chance, he happened to leave open the oak chest where he had hidden her wings. Spotting them, she was enraged at the deception. However, over the years she had grown to love her husband, so striving to forgive him she said nothing about her discovery.

But having seen the wings, now all she could think about was the freedom of the skies and the life she had once lived. Then the day came when she heard her flock flying overhead. She could resist the call no more. She went back to the chest and put on her wings.

The farmer returned home from work that day to see his beautiful swan-like wife, her wings outstretched, slowly flying into the sunset. Her voice could be heard plaintively crying, ‘Farewell.’ The farmer so bitterly lamented his loss that he pined away and within a few months had died.

There is another version of this story, in which a man from Cadoxton and his friend from Rhoose find another two swan-ladies on Barry Island. Like the farmer, they marry these ladies, taking them back to their homes. However the Cadoxton swan-lady gets run over by a cart (being a swan she was unaware of the dangers of road traffic), while the one in Rhoose re-discovers her wings and takes to the skies. A nice detail of this version is that, after the swan ladies are gone, the two husbands are left to raise their children alone, and they all have conspicuously long necks.

This story was first published in my regular column in the Glamorgan Star. I have compiled these articles into a second book on the subject of local history, folklore and legend called ‘More legends and folklore from Barry, Bridgend and the Vale’. It retails for £12.99 and is available from Amazon, all good book shops or from my own website at a discounted price on this link. It would make a great Christmas present for anyone interested in Glamorgan’s colourful past.

Categories: Barry, Barry Island, Vale of Glamorgan, Wales, Welsh Folklore
Tags: Candleston, folklore, legend, Merthyr Mawr, Ogmore, swan ladies, Swan lady, transmogrification
We use cookies on our website to give you the most relevant experience by remembering your preferences and repeat visits. By clicking “Accept All”, you consent to the use of ALL the cookies. However, you may visit "Cookie Settings" to provide a controlled consent.
Cookie SettingsAccept All
Manage consent

This website uses cookies to improve your experience while you navigate through the website. Out of these, the cookies that are categorized as necessary are stored on your browser as they are essential for the working of basic functionalities of the website. We also use third-party cookies that help us analyze and understand how you use this website. These cookies will be stored in your browser only with your consent. You also have the option to opt-out of these cookies. But opting out of some of these cookies may affect your browsing experience.
Necessary Always Enabled
Necessary cookies are absolutely essential for the website to function properly. These cookies ensure basic functionalities and security features of the website, anonymously.
Functional
Functional cookies help to perform certain functionalities like sharing the content of the website on social media platforms, collect feedbacks, and other third-party features.
Performance
Performance cookies are used to understand and analyze the key performance indexes of the website which helps in delivering a better user experience for the visitors.
Analytics
Analytical cookies are used to understand how visitors interact with the website. These cookies help provide information on metrics the number of visitors, bounce rate, traffic source, etc.
Advertisement
Advertisement cookies are used to provide visitors with relevant ads and marketing campaigns. These cookies track visitors across websites and collect information to provide customized ads.
Others
Other uncategorized cookies are those that are being analyzed and have not been classified into a category as yet.
SAVE & ACCEPT
Loading Comments...