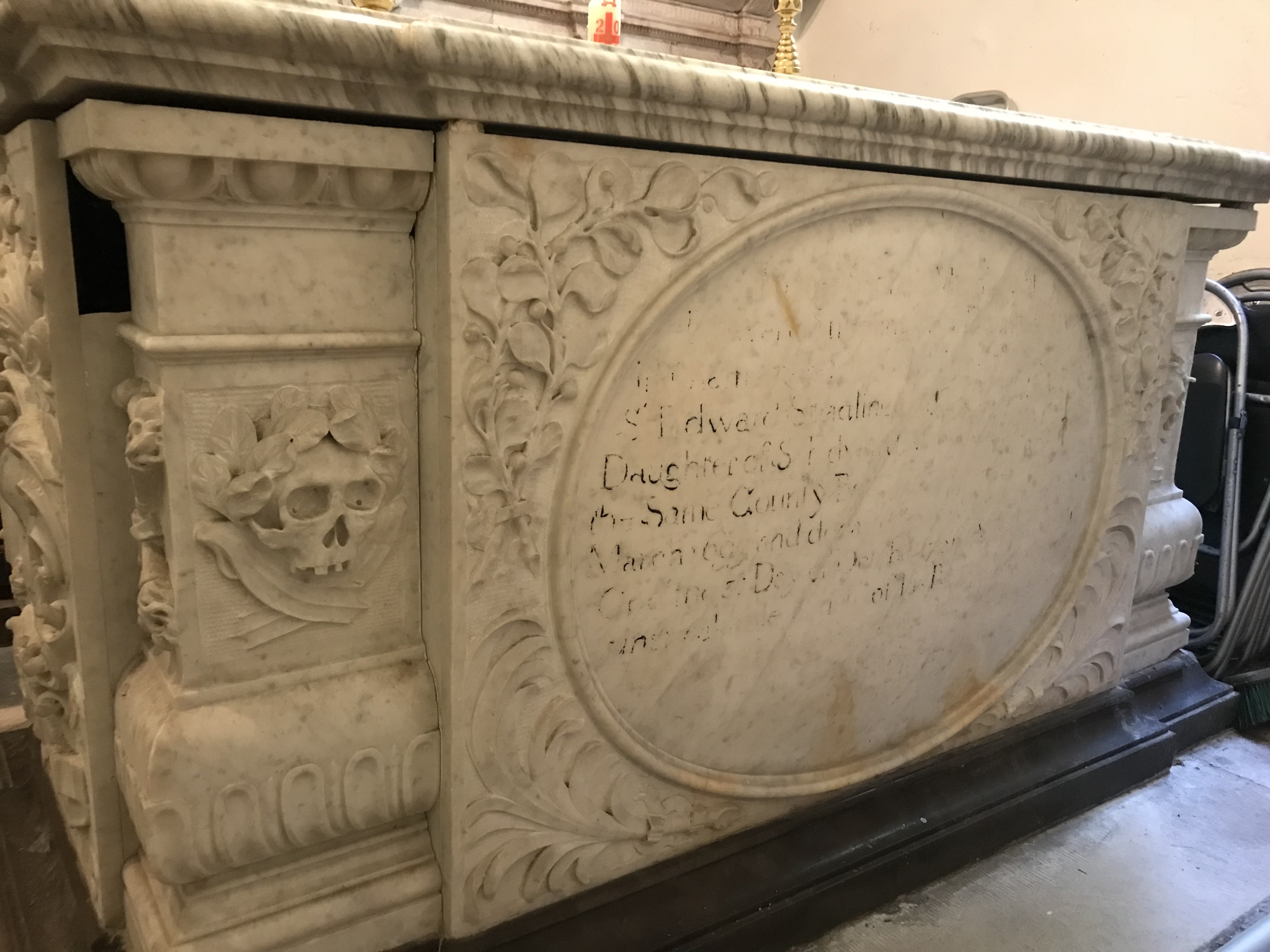 Regular readers of this blog may be interested to know that I have a new book out. As you would expect it is packed with fascinating exerts from our local history, as well as all the usual myths, legends, folklore, and ghost stories. Including the following episode. It concerns one of the most powerful dynasties in Welsh history; the Stradlings of St Donats Castle and how their ancestral home passed out of their hands under dubious circumstances.

Sir Thomas Stradling, was unmarried and in his twenties when he planned to go on the Grand Tour with his close friend from university, Sir John Tyrwhitt, the fifth baronet of Stainfield. Before the two young gentlemen set out on this great adventure, they made a pact with each other. If either was to die while on this tour, then the other would inherit the estate of the deceased. Or so it was claimed.

While the young men were both away, news reached the Stradling family that, on the 27th September 1738, while in Montpellier in the south of France, Sir Thomas Stradling had been killed in a duel. The family were devastated. Arrangements were made to bring Sir Thomas’ body home, and it was laid in state at St Donats Castle. But this was just the beginning of their woes.

According to folklore, Sir Thomas Stradling’s nurse, who had raised him since he was a baby, wished to pay her respects. She was invited to see his body in one of the state rooms at the castle. Gliding across the dimly lit room in which the coffin stood, she raised the lid to hold the hand of her young charge one last time. But as she reached inside the coffin, she gasped, stopped short, turned and made a sharp exit.

She was convinced that the man in the coffin was not Sir Thomas. It was animposter. She knew that, as a small boy, Sir Thomas had lost a finger on his left hand; it had been bitten off by (of all things) a donkey. But the man inside the coffin had all his fingers intact. Gossip was rife on the subject, and for years afterwards, locals visiting St Donats
Church would point at Sir Thomas’ tomb and declare, ‘That is where the imposter lies.’

Sir Thomas had left no heir, but before making his verbal agreement with Sir John Tyrwhitt, he had written a will. In it, he had left the castle and his entire estate to his cousin, Bussey Mansel, the 4th baron of Margam. It was said, however, that Bussey had visited St Donats Castle after Sir Thomas’ death, where he had been confronted by the ghost of one of the Stradling ancestors. The ghost had declared that it would never countenance the castle passing to a Mansel. Terrified, he turned his horse and fled as fast as it would carry him, never again to return to the castle.

It would be nice to believe that this property dispute was settled by a ghost, but in reality it became one of the most protracted and expensive courtroom battles of its day. It remained in litigation for over sixty years. Ultimately, St Donats Castle did pass to the Tyrwhitts, much to the dismay of the people of St Donats. In fact, it is
claimed that the vicar of St Donats Church was so incensed that ‘in his fury’ he destroyed a windmill and two watermills. That’s a lot of fury for a village parson. It’s always the quiet ones you’ve got to watch.

If you have enjoyed this blog, then you might well enjoy the brand new book, launched only this week, from which it came. It is called More legends and folklore from Barry, Bridgend and the Vale and is available to buy by clicking this link.

The author; Graham Loveluck-Edwards (me) is a historian, author, columnist and broadcaster specialising in the history and legends of Wales.

This item was also published by The Glamorgan Star newspaper.

This website uses cookies to improve your experience while you navigate through the website. Out of these, the cookies that are categorized as necessary are stored on your browser as they are essential for the working of basic functionalities of the website. We also use third-party cookies that help us analyze and understand how you use this website. These cookies will be stored in your browser only with your consent. You also have the option to opt-out of these cookies. But opting out of some of these cookies may affect your browsing experience.
Necessary Always Enabled
Necessary cookies are absolutely essential for the website to function properly. These cookies ensure basic functionalities and security features of the website, anonymously.
Functional
Functional cookies help to perform certain functionalities like sharing the content of the website on social media platforms, collect feedbacks, and other third-party features.
Performance
Performance cookies are used to understand and analyze the key performance indexes of the website which helps in delivering a better user experience for the visitors.
Analytics
Analytical cookies are used to understand how visitors interact with the website. These cookies help provide information on metrics the number of visitors, bounce rate, traffic source, etc.
Advertisement
Advertisement cookies are used to provide visitors with relevant ads and marketing campaigns. These cookies track visitors across websites and collect information to provide customized ads.
Others
Other uncategorized cookies are those that are being analyzed and have not been classified into a category as yet.
SAVE & ACCEPT
Loading Comments...
%d bloggers like this: